The Evolution of PGS

About the founding of Presidio Graduate School 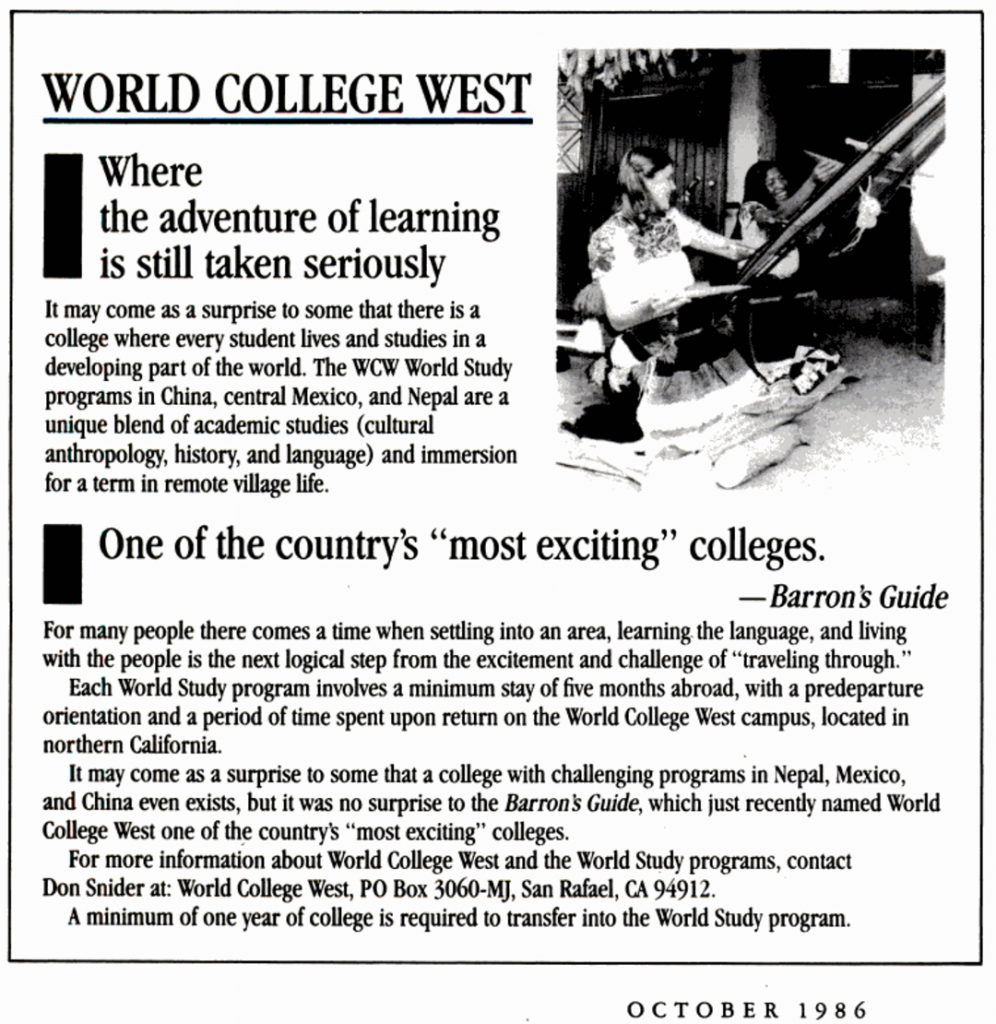 While PGS’s setting and educational level are new, its vision, values, and philosophy are based largely on the experience of WCW, an accredited work-study, world-study liberal arts college founded in 1973 and operated on its 194-acre environmentally designed campus in Marin County until 1992. Its experiential learning philosophy was based on the premise that only disciplined reflection on experience leads to learning that lasts. Seminar-size classes, work experience, and a year’s study in a non-Western culture such as China, Mexico, Russia, or Nepal were part of that experience.

At Presidio Graduate School, students are educated and inspired to be a new generation of skilled, visionary, and enterprising leaders transforming business and public policy and creating a more just, prosperous, and sustainable world. PGS activates students and professionals across a range of disciplines, industries, and sectors to bridge the gap between commerce and the common good.

In 1996, soon after the Presidio of San Francisco, a 200-year-old military post adjoining the Golden Gate Bridge, was converted to an urban National Park, the School established its presence in this 1,490-acre natural setting in one of the nation’s most attractive cities.

For several years, PGS offered non-degree courses and seminars in a program known as Sustainable Later-Life Design, focusing on areas contributing to an integrated, sustainable second half of life: Purposeful Work, Physical Well-Being, Economic Security, Spiritual Grounding, Meaningful Relationships, and Commitment to the Community. PGS also worked collaboratively with AARP and developed programs co-sponsored by Elderhostel, which was seeking ways to serve younger, midlife adults. But the Presidio board and administration were especially interested in developing sustainability-oriented degree programs.

So, in 1999, the School signed a contract with Vermont’s Goddard College for PGS to develop and pilot-test, during the 2000-01 academic year, a B.A.-completion program known as S E E D (Sustainable, Ethical, Enterprise Design).

Market research and focus groups revealed, however, that the major interest in sustainability-related higher education was from a different demographic group, men and women in their thirties and beyond seeking an MBA degree which integrates concerns for the sustainability of “People, Planet, and Profit.”

In 2002, therefore, the school signed an affiliation agreement with accredited Alliant International University to conduct an MBA program with a concentration in Sustainable Management.

The Evolution of PGS – By Co-Founder Dick Gray 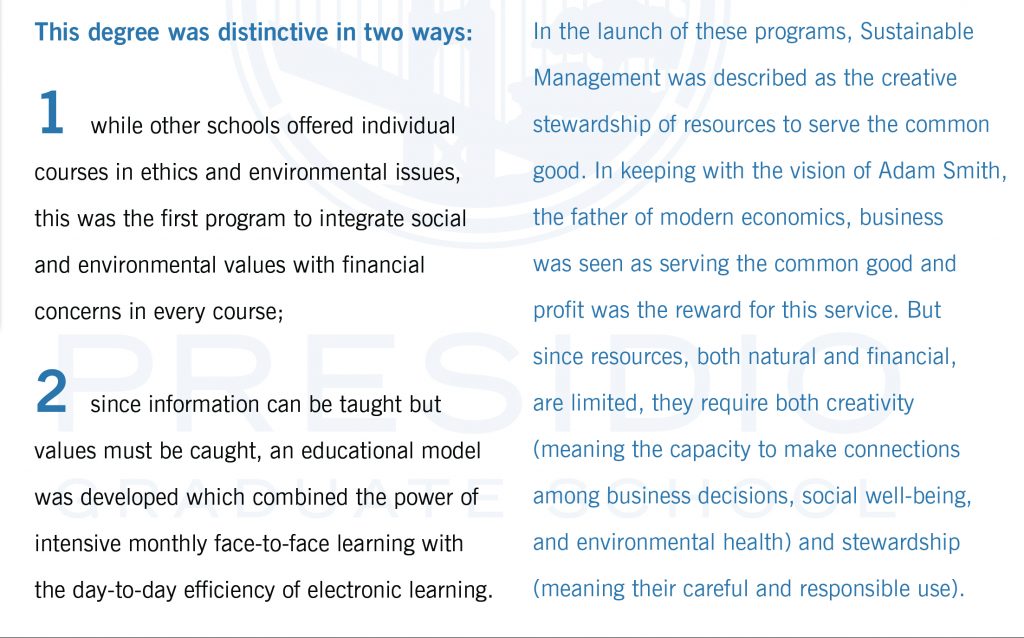 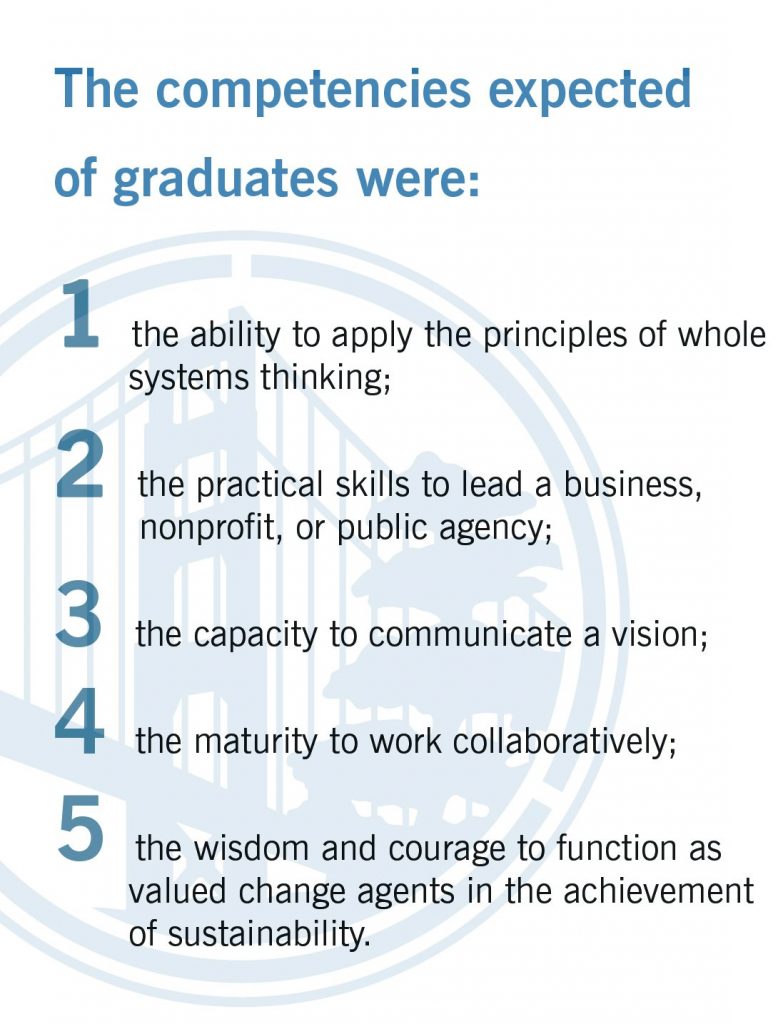 PGS has earned its own independent accreditation and acquired Pinchot University, formerly Bainbridge Graduate Institute (BGI). The school now offers MBA, MPA, Dual Degree, and certificate programs in San Francisco. Unlike schools which offer individual courses or programs in the social, financial and environmental dimensions of business and public policy, PGS integrates all three of these dimensions to decision-making in every single course.