For many, Bali is considered paradise, full of the sights, sounds, smells, and tastes of a lush tropical island. Trash, its stink, and its danger are hardly imaginable. 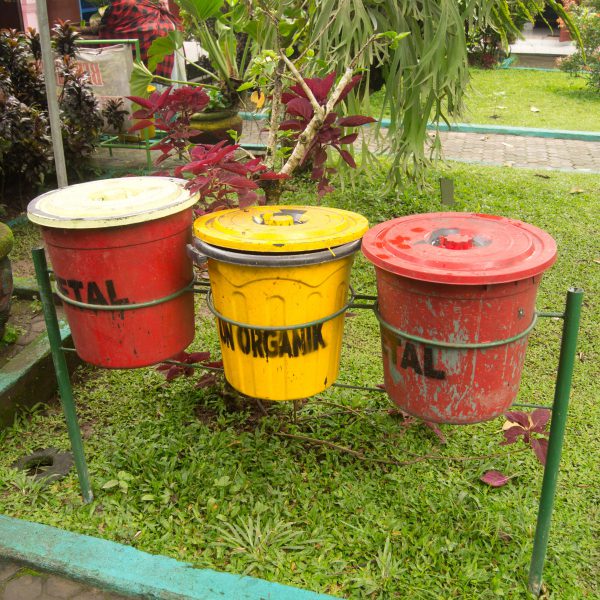 Sarah Vared and a team of Presidio Graduate School students recently visited the Indonesian island as part of an Ideo.org project to improve the reputation of recycling in Bali in a culture that is still prone to illegal dumping, even of hazardous waste.

“In most of the tourist areas, it feels pretty clean, but if you go inland just a bit, there’s a lot more trash,” Vared says. “It’s really shocking and disheartening what’s happening to the environment in Bali. The whole tourist infrastructure that has grown up has really caused quite a lot of trouble for the environment. “

Using the human design system, Vared and her teammates worked with grassroots organizations on the island to generate ideas that would help boost awareness and engagement in the recycling programs of Bali Recycling, a two-year-old triple-bottom-line organization that recycles paper, plastics, cardboard, metal, glass and organic waste.

And what was most remarkable for Vared was that she felt part of the “problem” as well as part of the solution while she was in Bali.

“Recognizing I was part of the problem, rather than thinking I was above it or different from it, makes it easier to think about what solutions could really work,” she says. “Tourists are leaving their worries behind. And being a tourist myself, I didn’t have to be trying to think of ways to get at that mentality; I was already there. Our solutions focused partly on not requiring too much of the tourists who are there to relax and refresh.”

Regional media reports that Bali produces around 20,000 cubic meters of trash each day – three-quarters of it not collected by a service, but rather dumped illegally, so solutions are not just necessary, they are urgent, says Vared’s teammate Clayton Carlson.

“Our ability to transplant our knowledge from San Francisco to the other side of the world makes me feel really good — to know I was able to leave an impact and at the same time be exposed to a completely different culture and set of problems,” Carlson says.

"In San Francisco, everyone is immersed in the ideas of sustainable living,” Carlson says. “In Bali, it’s just an idea starting to be talked about. That perspective is very enriching.”

“For me it wasn’t so much about going back to Bali specifically,” Vared says. “It was my first experience with international sustainability – an in-depth experience with the challenges different cultures face from the environmental perspective. I was really enlightened.”

Calling herself now “impassioned” about grassroots environmental work, Vared says she’ll change her career path from energy efficiency work with larger regulated businesses to something less removed from where the real difference can be seen.

“On a personal level, my career goals definitely have shifted,” she says.

As PGS Seattle alumnae, Jamee Herbert and Audra Jung, see it, starting a business is a lot like having a...

*This is the second article in our Q&A series with our current Student Representatives. Scott Bright is a second-year student...