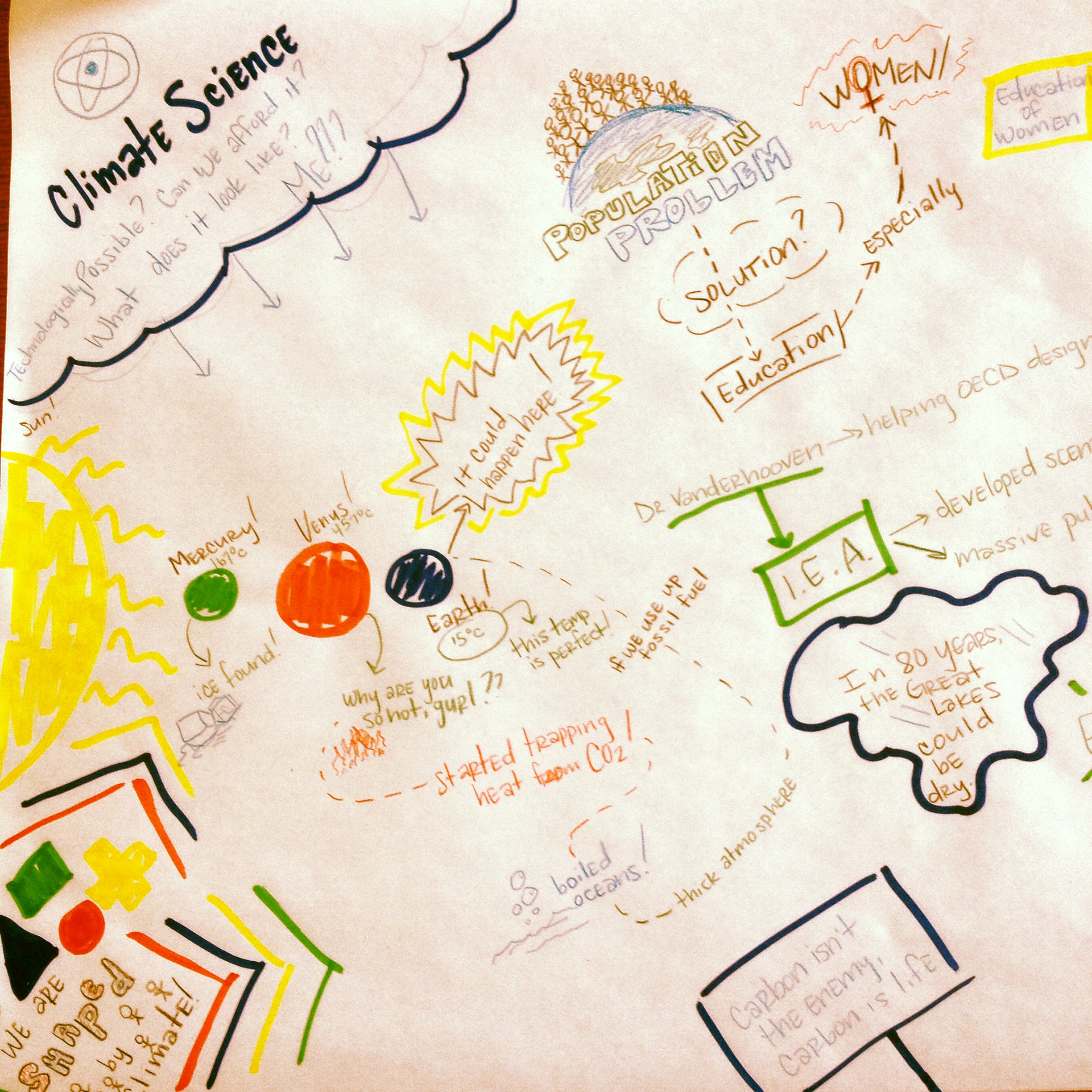 This weekend at Presidio Graduate School, fire was reinvented – the era of taking immediate and long-term action toward climate stabilization (CS) is well upon us. On a foggy Saturday in the Presidio, a multigenerational, multicultural, and multidisciplinary group of 17 students, practitioners, academics and activists discussed the current state of climate and reviewed different plans for changing course.

The intensive was co-facilitated by faculty member Amanda Ravenhill and Ty Cashman, former Secretary of Energy for the state of California and former faculty and board member at Presidio. A self-described “lifetime environmental activist,” Ty started his introduction by telling the group he stopped teaching because he was certain sustainability wasn’t possible anymore; he simply thought it was too late. However, in a quest to discover the “unvarnished truth” of what humanity is capable of when combining efforts toward a shared goal like CS, Ty’s passion has since reignited, and optimism for this generation’s capacity to change our destiny is evident. He and Amanda designed this one-day course to help answer the following questions around CS:

• Is it technologically possible?
• Can we afford it?
• What will it look like?
• How can we find our own place in the solution?

The flow of the day was an interactive, participatory-style lecture held from 10am – 5pm. Attendees were given sheets of poster paper, magic markers and colored pencils to do some “mapping” of the material. Amanda encouraged this activity so we would be using both sides of our brains while absorbing the information. She also created a space that allowed for attendees to bring in an emotional context, i.e. it was okay to get emotional given the enormity of the CS tasks at hand or be overwhelmed at the exciting opportunities of CS. Ty kicked off the content delivery with some context for where we’ve been, where we’re at, and where we need to be, admitting from the start, “it’s very late in the game, but the game’s not over!” 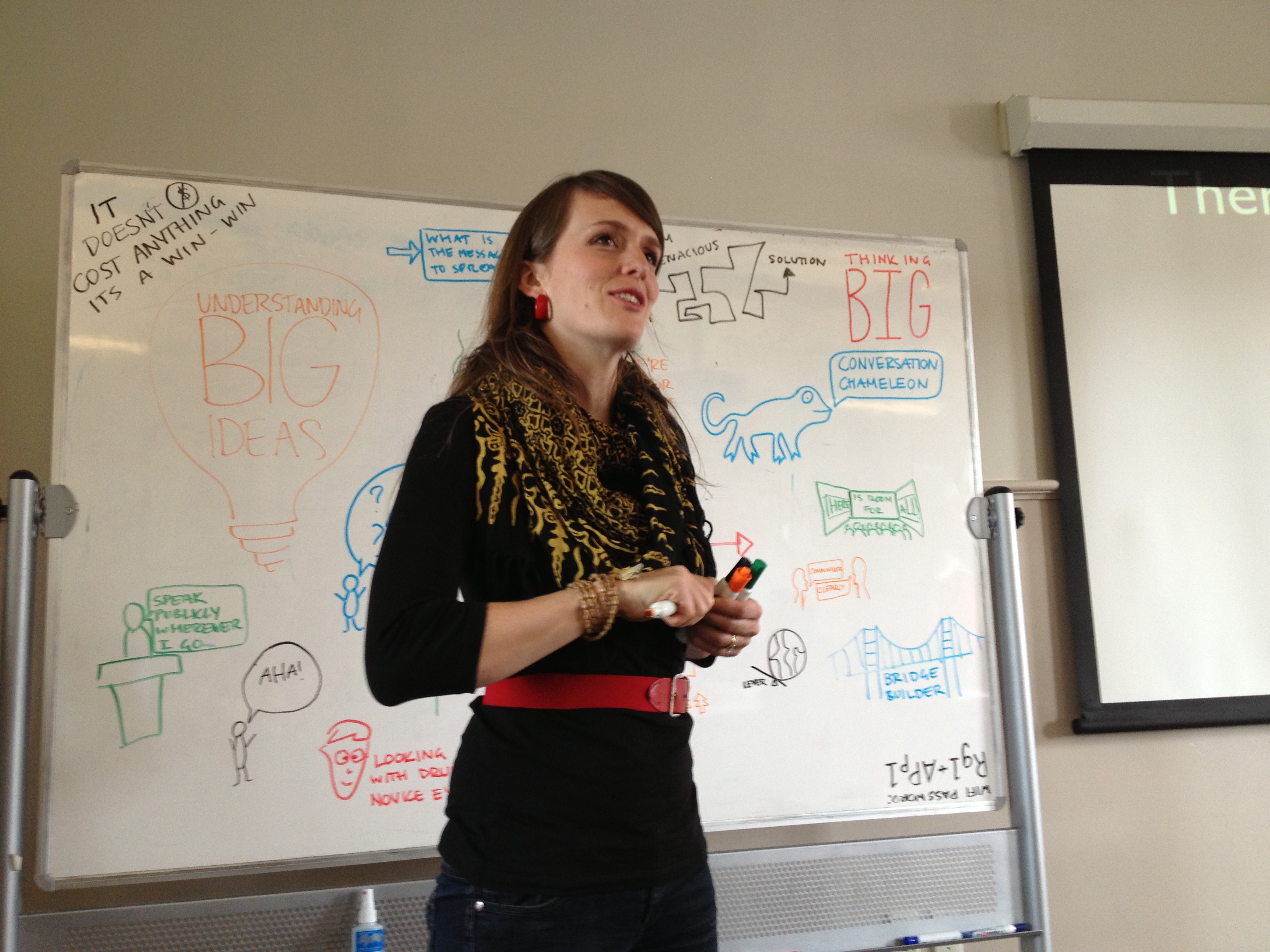 Ty discussed a bit of his work helping to usher in the use of wind technology in the state of California. He admitted in a half-joking, half-serious anecdote, “I got into windmills because I wasn’t afraid of heights.” Ty also spoke about the importance of making a movement symbolic. He said that windmills both symbolize something and create something. He likened them to a flag and extended this idea of symbols to our own institution, which he believes has the potential to be a beacon in the CS movement and continues to give him hope. He claimed, “In this generation, there are no ordinary people because we are the last cohorts of humans on earth who can stop this; that means anybody alive today can do something extraordinary.

Ty described one of his environmental heroes, a systems thinker and mid-level bureaucrat at the EPA named John Hoffman, who discovered a connection between chlorofluorocarbons (CFCs) and the ozone layer and formulated a plan to stop its depletion. The plan was successful and John went on to develop the government’s Energy Star program. The year was 1992 and this, Ty lamented, was the last time the U.S. was an environmental leader.

Amanda and Ty described the current state of humanity’s interaction with climate change as being at a “stiction,” a simultaneous static and friction whereby humanity must become “unstuck.” Part of this is accepting the magnitude of the challenges before us. For some context, we took to the universe and examined the planet Venus, currently 457°C (Earth is 15°C – a perfect temperature for sustaining life). Climate scientists have determined that Venus got so hot because it started trapping heat from CO2, which boiled the oceans and resulted in thickening of the atmosphere. In their estimation, a similar phenomenon is happening on Earth. Noted climatologists like James Hansen and even physicists and cosmologists like Stephen Hawking agree: if we continue to use fossil fuels, we could be Venus.

After digesting the science a bit, Ty spoke generally about the large effect shifting to renewable energy would have on CS. He explained that not only can we afford it, it will actually make money! He also spoke optimistically about the adaptability of the human species, saying it’s not that life can’t survive at a higher temperature, but we’ve been living for 11,000 years in the most perfect climate – a climate that allowed for the invention of agriculture. We’ve have adapted over and over again to new environments, for a million year and this adaptability is what will help us confront the challenge of CS.

Where We Need to Be

The next half of the day, we looked at a variety of different plans and reports for CS:

We were also asked to reflect on our own unique contribution we bring to the CS movement. This intensive was incredibly valuable because it reminded me of the climate urgency and embedded the idea that we are all walking revolutionaries. Right now, we are the single most important generation that has ever lived because we’ve been given the opportunity to change the course of our destiny; we have the opportunity to design a world that works for all living things and the planet.

As we closed out the day, Ty reminded us that meeting this challenge will put us in a place we’ve never been before and no other species has been to our knowledge. We’ve adapted over and over again to new environments, for a million years and this adaptability is what will help us confront the challenge of CS.