How to Help the GDP Grow Up

Presidio Graduate School hosted a symposium ‘Outgrowing GDP: A New Approach to America’s Accounting System’ at Bloomberg LP yesterday, off Pier 3 near the Ferry Building.  The half-day event included a mixed panel of current and former students and professors, each with a unique area of study relating to this country’s preferred financial barometer, GDP.  In addition, keynote speaker Jacques Leslie was on hand to present his experiences in Bhutan, a country experiencing significant environmental challenges due to rapidly melting glaciers within its Himalayan mountaintops.  How this story, along with the experiences presented by the panel, is affected by the misuse and misrepresentation of GDP served as the foundation for a discussion tackling how to best derive and implement a new solution.

If you haven’t taken a look at each of the speakers, here’s a link to each individual’s bio:

Below is a summary of each individual presentation, the panel discussion, and finally Jacques Leslie’s creative non-fiction account of his experience in Bhutan.

First off, a little bit about Gross Domestic Product, or GDP.  GDP is but one of many financial indicators used to assess a country’s economic condition and is frequently used to make decisions pertaining to both economic and social well-being.  From a political aspect, it is often referred to as the measure of a country’s current financial status.  But it wasn’t originally meant to be.   As both Maggie and Lew pointed out, it was originally designed as a lens into the flow of goods, not the accumulated stock.  And it definitely wasn’t intended to be a measure of the nation’s success.  Simon Kuznets, the man who invented the concept of the GDP even stated when he first presented it, “…the welfare of a nation [can] scarcely be inferred from a measure of national income…” To use it as a tool to measure such progress is an inaccurate measurement.  A simple example of this is the BP oil spill of 2010.  The disaster actually increased GDP, yet no one would say it was a success story.  (Unless maybe you watched and believed the BP gulf restoration commercials…)  The realization of this misrepresentation may best be illustrated by Robert Kennedy, heard famously addressing the dangers of measuring a nation’s success with GDP at the University of Kansas, 1968 (tune in at 16m into the speech).

You manage what you measure

Although no one could pinpoint who coined the phrase, it came up a number of times during the discussion.   GDP does not represent wellbeing, yet we often use it as such.  We actually do a pretty good job at it too, sometimes to the detriment of our society.  Just take a look at history. The below graphs presented by Lew Daly illustrate that the relationship between growth and wellbeing are not always aligned. 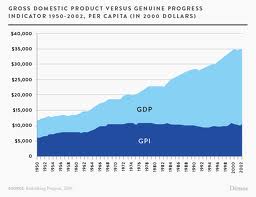 The question remains if we are capable of effectively managing statistics like GDP, why haven’t we moved to a better system?

A handful of alternatives to GDP already exist.  The main alternatives discussed today included the Genuine Progress Indicator (GPI) and Gross National Happiness (GNH) (Not to be confused with the Global Happiness Index, which measures tweets around the world and analyzes how many smiley faces, etc. are posted…).

GPI is commonly used as a substitute for GDP.  It takes into account factors such as natural resource depletion, environmental damage, and other negative externalities of production.  It also includes the value of common societal perks, such as leisure time, education, and volunteer work.  An easy way to compare GPI vs. GDP is with the analogy of Net Profit vs. Gross Profit.  GPI attempts to give a better representation of the end result than GDP.

GNH is a little different.  The term was coined in 1972 by Bhutan’s fourth Dragon King, Jigme Singye Wangchuck. It attempts to create an overall score for a Nation’s wellbeing starting from a more holistic viewpoint than simply economics.  While GNH takes in a wider range of factors than GHI, it also includes more subjective measurements, lending to criticism to its accuracy.

So, which method did our panel agree was the most suitable replacement for GDP.  Neither!  The general consensus was that the best solution was the GDP with additions, especially the inclusion of the change in natural capital, along with health and environmental externalities.  Not that other methods aren’t valuable, they just don’t have the same preconceived importance to the public.

After all, GDP has been around for almost 80 years and we’ve known from the start it wasn’t meant to be used as it is- but we still use it that way.  Sometimes it’s more effective to improve existing constraints on something the public is familiar with than to attempt an introduction of something completely new.  Plus, there’s less backpedaling for those politicians who have championed its use in the first place!

The panel also agreed that changes from business leaders in company reporting—along with state-level government reporting—are both powerful avenues for change because of their greater accountability and ability to enact change quickly, compared to the federal level.  Currently, there are four states measuring GPI (Vermont, Utah, Oregon & Maryland) and they all outperform the U.S. GPI.  Awareness and transparency are the first steps in finding solutions.

I thought it best to let Jacques’ stories speak for themselves.  Although not yet published, I recommend you keep an eye out for Jacques’s experiences once they are. The stories he shared detailing Bhutan’s efforts to prevent future catastrophes were truly remarkable.  You can follow Jacques here.

A special thanks to event sponsor The Fred Gellert Family Foundation and Bloomberg LP for hosting the event.