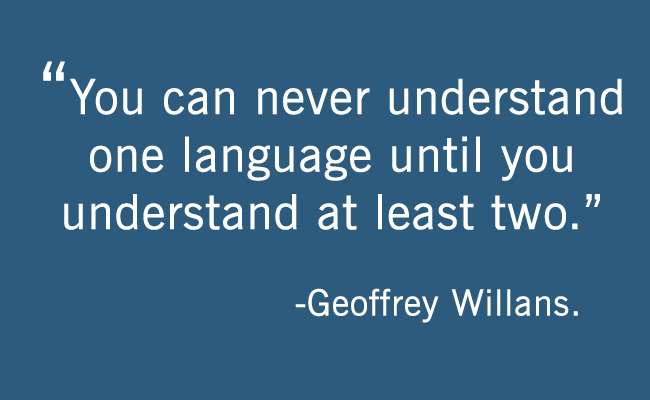 Learning the Language of the New Economy

I was a humanities major as an undergrad. Asian Studies, with a concentration in Japanese language. Part of the challenge of learning a new language for me was this: It was not just the words I needed to learn, it was an entire way of thinking, a world view, and a shared cultural understanding. In Japanese, for example, you can barely ask someone the time without knowing something about who you are in relationship to that person. You use different words if are asking your brother for the time than if you are asking your teacher for the time, for example. Getting it wrong can be embarrassing, or at least confusing for the person you are talking to.

Learning the language of a new economy

Now that I am nearing the end of my MBA program at Presidio, I am realizing that all this time I have again been learning a new language. Scratch that, actually two new languages. One is the language of traditional business, economics, and finance. The other is the language of systems thinking, in service of sustainability of our social, economic, and ecological infrastructures. I have heard Presidio teachers across the curriculum say again and again that when it comes to making an argument for change, getting the words right really matters. If you want to be part of the conversation, you have to know how to speak the language. Getting it wrong can be embarrassing, but worse than that, it can be a barrier to making the change you want to see in the world.

These thoughts were on my mind as I headed to SOCAP 2015, a conference about social capital markets, as a blogger for Triple Pundit  this month. I had been to SOCAP once before, two years ago, and thought that I had been following the talks pretty well. But this time, armed with a better understanding of the language of the markets through my Finance, Market Failures, and Capital Markets classes, I was able to understand the talks with layers of complexity and meaning that I had completely missed before. It was exciting, as if someone had handed me the keys to a brand new car (an electric car, of course). It was time to take the car for a spin.

Of the several blog posts I had planned, the one I most wanted to write was about Tim O’Reilly (of O’Reilly Media fame, creator of the concepts of Web 2.0, open-source software, the Maker Movement, and many other things). In making my request for his time, I wanted to be sure I asked questions that he thought would be interesting enough to answer. I think if I had had the same chance two years ago, I might have asked something like, “What do you think are the most serious problems facing the economy today and what should we do to solve them?” Instead, drawing on the concepts from Ryan Cabinte’s (award-winning!) Market Failures class, I asked, “What market failures will the next economy introduce, and what do you think the intersectoral solutions will need to look like?” Much more interesting question, and boy did I get an interesting answer. You can see the article here: Tim O’Reilly and the WTF Economy: A Conversation About Tech and the Future of Business.

Since the article came out, I decided to start sharing some of what I have been writing for Presidio assignments on social media, just throwing tweet-sized ideas out to see what resonates. I took the retweets by both O’Reilly and the economist Mariana Mazzucato as confirmation that what I am learning at Presidio does indeed resonate beyond the classroom. So, thank you Presidio, for teaching me the language of engagement with topics that matter and people who are making a difference for the future. I am glad to be part of the conversation.