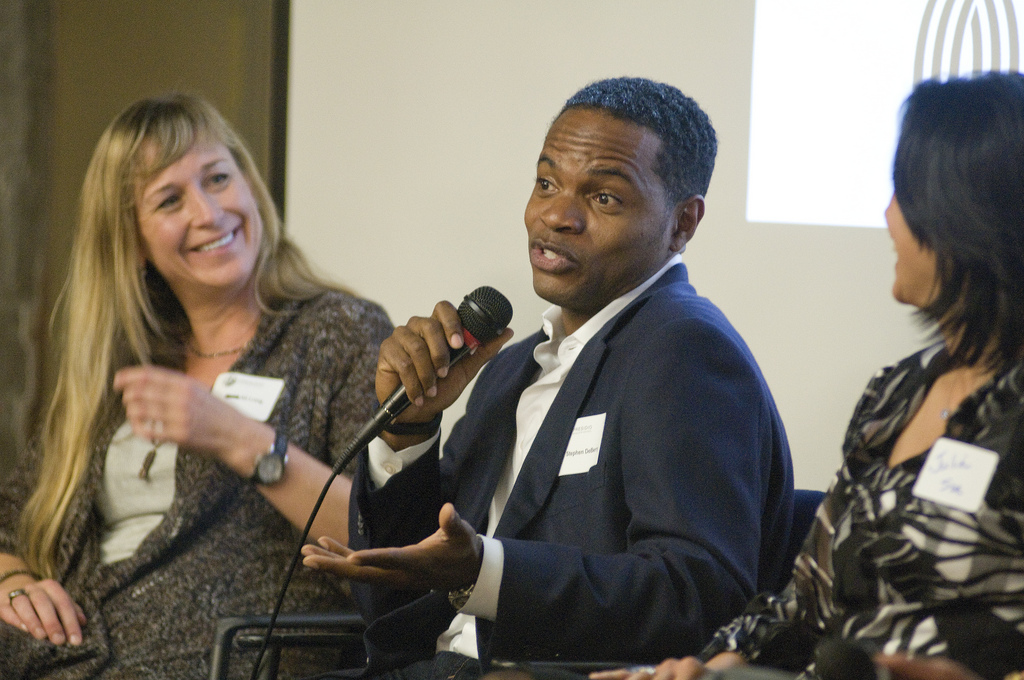 Impact Investing – More to the Story!

On March 20th, Presidio Presents featured a panel of entrepreneurs at the leading edge of impact investing in conversation with Presidio President and CEO, William Shutkin.

Prior to attending, I assumed the panel would indicate that traditional philanthropy and government resources alone will be unable to fully address the social and environmental challenges facing us ahead.  Thus, somehow we need to mobilize mainstream capital markets to fill the gap. Adding that it is proving difficult to make that happen and then discuss what was working and what wasn’t.

Sure, there was a little bit of that.  But there was much more to the story – one that fuels great optimism about the future!

In order to maintain their tax-exempt status with the IRS, foundations must endow 5 percent or more of their funds each year in projects or programs that provide societal benefit. Typically, foundations make below market rate loans and grants to meet this requirement, generally for projects or programs that align with one or more missions established by its founders and/or trustees.

The rest of the foundation’s assets are typically invested in broader market products by money managers seeking market or better rates of return. If they are continually successful, these foundation’s socially beneficial work can be potentially funded in to perpetuity.

Especially at larger foundations, however, endowment activities and these money managers of the other 95 percent operate in silos, which can lead to undesirable results.  The Bill & Melinda Gates Foundation proved to be an example, when in 2007, the LA Times broke a story about the Gate’s foundation investing and granting at cross-purposes.  An oil company that the Gate’s foundation had invested in had operations in Nigeria believed to be causing respiratory and other illnesses at the same time the foundation was funding health programs in the Niger Delta.

Maud-Alison “Ali” Long, President of the Springcreek Foundation, indicated that impact investing managers seek to offer investments across a foundation’s assets, which align better with a their underlying mission(s) as well as provide a good risk-reward ratio. She has co-authored a paper on how their foundation has been able to use impact investing to “Promote Sustainable Food Systems” across their market and program return on investment needs.

Not just for Foundations

TIAA-CREF is trailblazing on this front and formed a social and community investment department in 2006 after a survey revealed that the top priority for two-thirds of its asset holders was to have more positive social and environmental impacts reflected in their retirement’s investments.

Private equity and wealthy angel investors have been joining or forming impact investing networks too, especially looking for new ventures started by social entrepreneurs. A new generation of ‘social venture capitalists’ has emerged made up those who believe that funding a business rather than handing out a grant is more effective at sustaining a desired societal outcome.

Stephen DeBerry, Chief Investment Officer at Kapor Enterprises and Founder of Bronze Investments, appears to be tapped in to this with his focus on upstart, social ventures that use a mix of business mechanics and lessons from Anthropology to become societal game-changers. This includes prior investments in UniversityNow, whose mission is to ensure that a quality higher education is available to people everywhere, and LendUp, which is seeking to be a better alternative to payday loans.

With many shocked at what happened to their AAA-rated investments in the recent market collapse, some are taking a closer look at investing strategies previously shunned.  There is some preliminary evidence that many impact investments are not correlated with the broader market. For example, micro-lending, crowd-sourcing as well as renewable energy and other community development bond funds did well through the collapse.

Julie Sze, Managing Director of Sonen Capital LLC, indicated that she is focused on early adopters today, but is ultimately working towards removing the real or perceived concessionary returns – the assumed below market rate of return – often associated with impact investing as it once was for emerging markets. Eventually, it will be hard to find an portfolio asset allocation that doesn’t include impact investments.

New blood wanted! Most firms are small, but growing at much faster pace than the rest of the market.

Chris Larson, Director of Real Assets and Sustainable Agriculture Programs at New Island Capital, talked about the need for people with a passion for particular sector. Creativity as well as more investment discipline or due-diligence skills are also needed on their staffs, noting that 50% of the decision in new investments was still driven by gut today. But the panel all agreed that growing too fast and making poor investments or later discovering investments have been ‘impact washed’ were cause for them to grow their firms carefully.

Julie Sze added that being “Cheap and Cheerful” was also a great way to get in the door while subsequently showing off your passion and aptitude for impact investing.