This spring marks the 10th anniversary of Presidio Graduate School‘s first graduating class—22 students who took a risk on a new way of approaching business that doesn’t look at financial gains as the sole determinant of success, but instead takes a systemic perspective, evaluating decisions within the context of how they impact people, profit, and planet.

Since then, the triple bottom line approach to business has become fairly well known.  But what may seem normal these days was just a budding movement 13 years ago with Presidio Graduate School and its first intrepid cohort of students—the C1s—at the forefront.

Over the past few weeks I’ve had the privilege of speaking with several C1s (as well as the school’s founders), and some common themes emerge when asked why they originally decided to attend: They wanted their work to feel meaningful—to really care about what they were doing on a daily basis, and saw PGS as a means to that end. They aspired to be of service in their professional lives, and to help make the world a better place through influencing social and environmental progress. PGS’s mission to “educate and inspire a new generation of skilled, visionary and enterprising leaders to transform business and public policy and create a more just, prosperous and sustainable world” resonated with them. They didn’t believe business-as-usual was sustainable and were driven to change the status quo. An even mix of men and women, with an average age of 32, they were idealistic in their values yet pragmatic in their approach.

For example, Devon Crews (C1) is on the leadership team at the Citrix Startup Accelerator, funding and fostering world-changing mobile, cloud and collaboration technologies. In an email she explained how attending PGS significantly altered her career path and worldview. Says Devon, “As a Silicon Valley investor, I deeply consider the social and ecological value of the technologies—and the integrity of the entrepreneurs—I fund. It’s so exciting how much cleantech and microfinance has evolved since we began in 2003. I’m dedicated to the ongoing growth of Presidio, and am told that I have both referred more students to the school and hired more Presidio graduates than any other alum. I have so many cherished memories of my Presidio experience, and deeply appreciate the intimate learning environment, the close-knit community of friends and teachers, the inspirational scenery, and all the great meals, walks, and laughter we shared.”

Steve Attinger (C1) feels similarly, saying, “If you’re committed to the field of sustainable business, it’s the place to be.” He first found out about PGS through attending a breakfast event at Stanford University focused on sustainable business. Doug Paxton made an announcement about the school opening its doors soon, and Steve sparked to the idea. He’d been thinking about attending graduate school, but worried that a traditional MBA would be too dry. He got Doug’s card and followed up with him afterwards. He later spoke with Hunter Lovins, which resulted in his decision to attend. Says Steve, “I don’t know if you know Hunter, but she can be pretty convincing.” He’s now the Environmental Sustainability Manager for the City of Mountain View and he credits his MBA from PGS for helping him stand out from other applicants. He’s built Mountain View’s sustainability program from scratch over the past seven years, and says it’s been an incredible entrepreneurial experience.

Taja di Leonardi (C1) knows all about entrepreneurial experiences—she’s the founder of Ecohome Improvement; a Berkeley-based store focused on helping people green their homes, and says PGS gave her the confidence and capacity to launch a company of her own. The idea for Ecohome Improvement began as her Capstone project, during which time students are tasked with solving a problem through the creation of a business. It was her favorite class at PGS because it allowed her to apply everything she’d learned to date while being intensely creative. Her business now generates $2-3 million a year. She arrived at PGS from Dominican University’s Green MBA program (now defunct), transferring to become the final student needed to launch the PGS program.

George Kao is another entrepreneurial C1 graduate, and believes the online education component at PGS planted the seed for taking his professional coaching business online and turning it into a successful venture—bringing in $300K by year three. His explanation is fairly organic, as many good ideas are, saying he was advising friends on how to make the most of LinkedIn and create an authentic personal brand to help them professionally when someone suggested he develop an online coaching series, to reach a broader audience. The rest is history, but George makes clear money was never his primary motivator, and that is why he initially dropped out of law school to attend PGS in the first place—he wanted to be around people who weren’t solely driven to make money and were instead seeking healthy work/life integration.

David Clark (C1) would agree, saying, “I really learned how powerful and important it is to find people with shared values, and a shared vision of the future.” He’s now the Sr. Consultant of Strategy for Habitat for Humanity, responsible for helping in-country businesses scale growth. He says he remained embedded in the PGS community long after graduating, working as a Teaching Assistant for both Operations and Strategy and helping to establish the governance process at the school. “I loved it,” says David, “and I was able to meet so many more people across different cohorts that way.”

These “realistic idealists” are exactly who Richard M. (“Dick”) Gray hoped would attend the school he co-founded with Steven Swig. This wasn’t Dick’s first academic venture—in 1973 he raised $13 million to begin World College West, an undergraduate degree program with an education philosophy that “only disciplined reflection on experience leads to learning that lasts.” He wanted to help students to have meaningful experiences, build character, and establish values that would support their decision-making well into the future. He’d previously left a 16-year career in advertising after his father passed to attend theology school, having what he describes as an existential crisis, and this ultimately led him to academia. When I interrupt him to point out just how much $13 million was back in the ‘70’s he matter-of-factly says, “When you’re really committed to something, people tend to get on board.” Indeed, his presence was so powerful that when he decided to retire after a successful 15 years running the school, it folded within a year. After a period of mourning, he began envisioning what would later become PGS.

Steven Swig had spent his career working as a corporate attorney focused on mergers and acquisitions, and had become increasingly disillusioned by the prevalence of pure profit motive—often at the cost of product quality, research and development, and jobs—in the CEOs he was counseling, most of whom had MBAs. He began researching business schools like Wharton to better understand what was contributing to this consistent perspective and saw an unrelentingly singular focus on the financial model as a way to approach business success. After voicing his frustrations one day, close friend (and wife of existential psychologist Rollo May) Georgia May told Steven he should connect with another friend of theirs that was starting a innovative business school. His name was Dick Gray.

Steven has consistently been one of PGS’s key financial supporters over the years but says, “Being a major donor isn’t what I want to be known for—it’s bringing sustainable management to the country and helping to close the ever-widening wealth gap.” This is his passion and what he sees as the biggest threat to both economic and systemic sustainability in America. Of particular concern, Steven notes, is the $1.3 trillion in student loan debt that future generations will inherit. In a recent piece for The Huffington Post, he and others boldly propose abolishing all student loan debt in this country. He and his wife are Senior Fellows of the Advanced Leadership Initiative at Harvard. University, where they’re pushing to make this proposal a reality. But when asked to reflect on his time at PGS he says, “It’s the best thing I’ve ever done—besides marrying my wife and having our children, of course.” He describes the first cohort as “a radical experiment.”

“A radical experiment” is a fitting description from the students’ perspective as well and worked to further strengthen their bond—being part of something so new, exciting, and disruptive. When asked to recall their strongest memories from that time, it’s the human connection that consistently comes to the forefront. “We went through something amazing together,” says Chandra Alexandre (C1). “We got to embody a personal transformation process, and have it reflected back to us.” Chandra is now the VP of Development for the Global Fund for Women, and she says having an MBA focused on sustainable management in the nonprofit sector has been hugely valuable. She fondly recalls the work of professors Alexander and Kathia Laszlo and how much they embodied the principals they were teaching. The authentic leadership class also made a lasting impact on her, in part because it aligned so well with the spiritual principals by which she already lived her life. Says Chandra, “Presidio is about caring. It’s for people who give a shit, and crave transformation.” 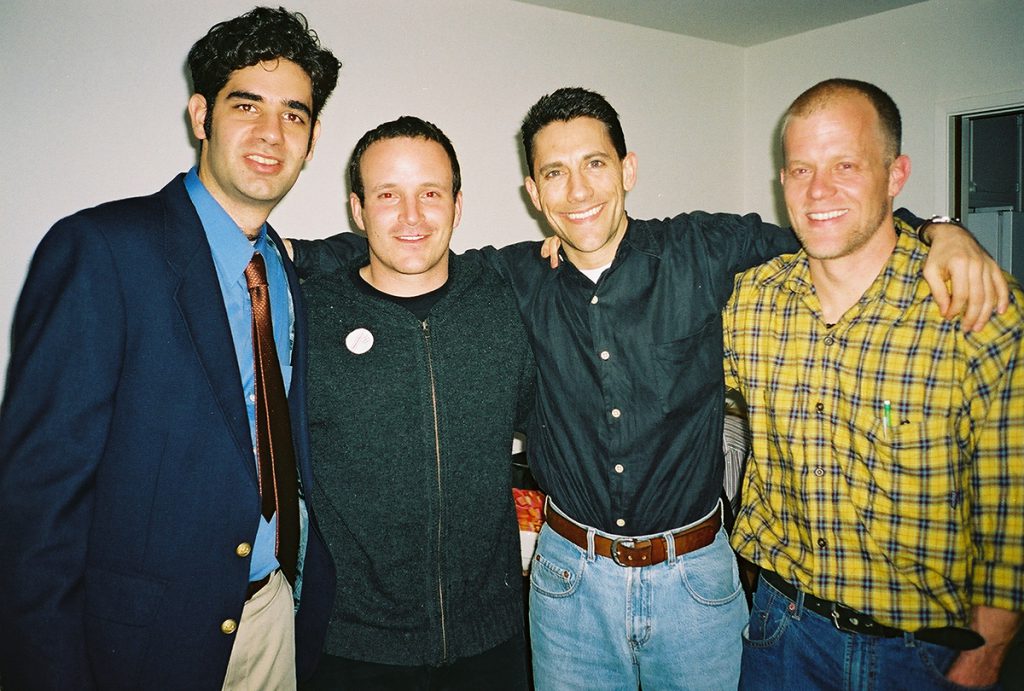 Thankfully for PGS, or by design, this describes a growing population of the workforce in America. A recent Philips Work/Life Survey found that 68% of the current workforce would be willing to take a salary cut for work that better aligns with their personal values, and 55% of Generation X and Y have changed career paths in an attempt to find more meaning. PGS specializes in assisting this kind of career shift, and unlike other MBA programs it doesn’t rely on elective courses to trigger inspiration. Instead, it brings a triple bottom line perspective into every single subject—including finance.

There’s also a huge focus on experience-based learning with student teams completing projects for mission-driven companies and organizations as a key component of their coursework. And because classes meet in-person just four days a month (if attending a full-time degree program), and supplementary engagement occurs through an online portal, PGS is a feasible option for those living across the country. But being based in San Francisco is unarguably beneficial, given its epicenter status for all things tech, innovation, and green.

PGS’s future is looking bright, with 700 plus PGS alumnae and 150 current students following in the footsteps of that original cohort. Says William Shutkin, the school’s President and CEO, “The next five years will be a period of increased creative freedom. It’s going to be a lot of fun.” When asked why he was drawn to his current role at PGS, he mentions the “inevitable destiny of it” and says it’s where he would have gone had it existed when he was applying to graduate schools.

Before hanging up the phone with Dick Gray, the visionary co-founder of the school, I ask him how he feels about PGS today, 10 years after the first class of students graduated. He initially avoids taking any credit saying, “It takes a village.” But then, after a thoughtful pause, he admits, “I’m pleased with how things have turned out—it’s all that I hoped it would be.”