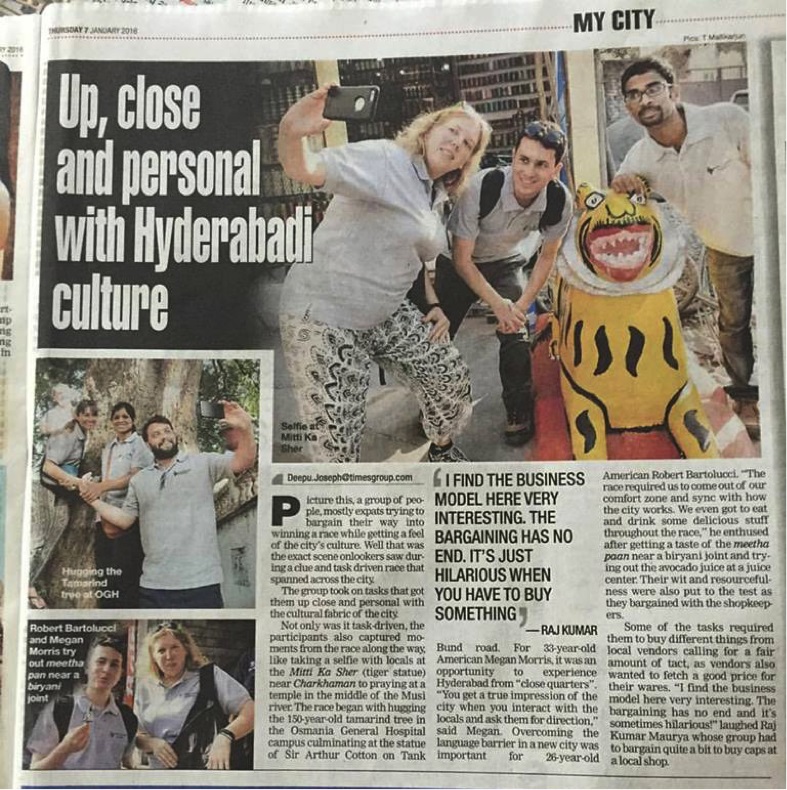 Welcome to the City of Amazement: Musings from the International Sustainability Club in India (1/10)

We filtered in from various locations into Pollinate Energy’s home base called the Hive to start our newest ISC adventure in Hyderabad, India. Our official start Monday morning in the Hive was only the start to an overflowing day of introductions, immersion, and adventure.  We met and learned more about our hosts, Pollinate Energy and the Indian students that would be working with us on our projects, and then we were thrown into the cultural deep end with an Amazing Race thrown by a local entrepreneur around the city of Hyderabad.  In an overwhelming and astounding five sensory involved day, impressions are solidified in many ways… 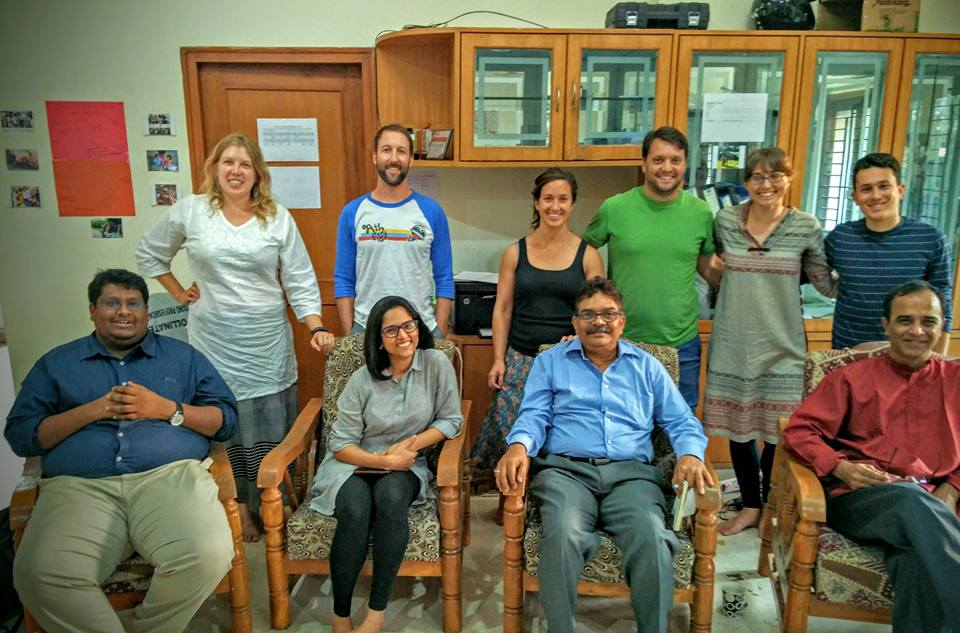 “Having only landed in India the night prior, the Amazing Race exercise quickly presented a first glimpse into the bizarre and incredible world of India. Armed with Indian SIM cards, Uber and Google Maps, we competed to complete tasks and locate given clues. The familiarity of these apps combined with our Uber driver’s unexpected request to navigate him to the destination amongst the chaotic traffic remains an experiential dichotomy I will never forget.”     – Charles

“We started the day being instructed to cut through the Osmania Hospital to get to the 300 year old Tamarind tree that saved 150 lives during the 1908 Musi floods. It was interesting to see the state of hospital compared to what we expect to seein a hospital in the United States. We also got to sample diverse tastes of the street food, such as Paan made with the betel leaf, as required to complete the clues for the Amazing Race.”  – Megan 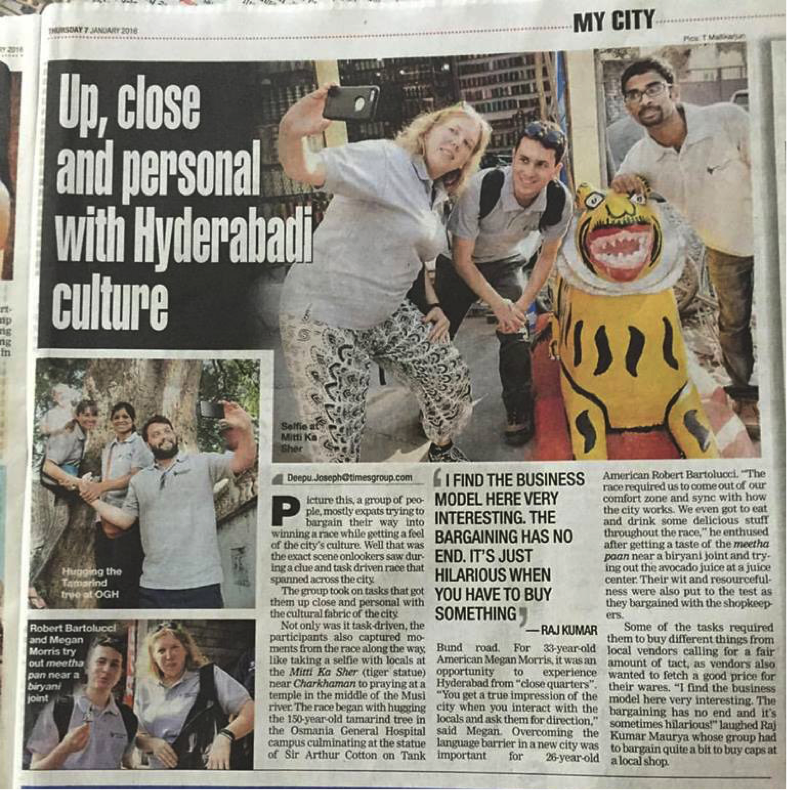 “The Amazing Race was such a fun and exciting way to dive into the experience of a new and slightly overwhelming city. Running through the crowded old city markets and streets with the goal of learning the name of an historic arch or fountain, sampling the local street food, haggling prices for goods, and making offerings to the revered cows; all while crossing paths with familiar and excited faces throughout the city was our first introduction to the hustle and bustle of Hyderabad. It’s hard not to bond with your group (or the local people that have to fit six into your selfie lens) over a new experience, a little competitive spirit, and a bumpy auto rickshaw ride.”  -Hannah

“There came a moment in the Amazing Race when when my team, who consisted of Ryan (a PGS alumnus), Herbie (a Pollinate fellow from Australia) and Srinidhi (a Pollinate fellow from India) were all jammed into the back seat of an auto rickshaw. Sitting on top of each other in a confined area half the size of a VW bug, we laughed comfortably as old friends, though most of us had met less than twelve hours before.”  – Christina 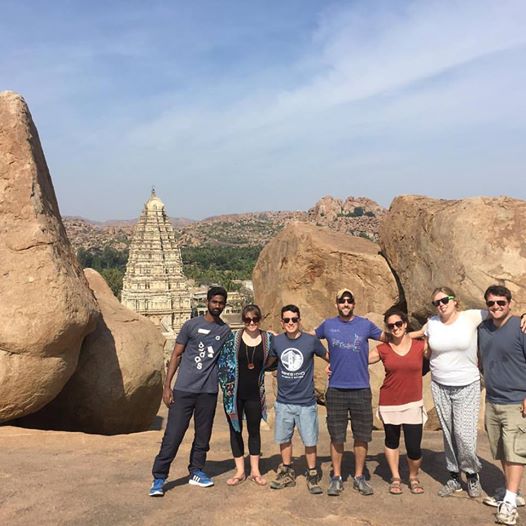 “Our first day together in Hyderabad was a special one. After listening to introductions from all of the fellows on-hand, we were asked to hop in cabs and meet near a historic tree at the bank of the Musi River. The ride across the city was hectic, with the perpetual sound of honking horns and darting rickshaws around every corner. When we finally exited the cab near the meetup spot, we found ourselves lost and had to travel through a hospital to find the tree (which in itself, proved to be a harrowing and humbling scene). And so began a day-long effort of connecting with locals to find our way around town, searching for clues, trying uniques foods, and immersing ourselves in Hyderabadi culture. Along the way, we pushed each other to be comfortable with the uncomfortable and we put ourselves in the shoes of the nearly 7 million people that coexist within the metropolis.” – Robert

“There’s no better way to learn about a city than to go out and get lost in its streets, parks, shops and monuments and then find your way home. That’s exactly what the ISC India team did on their first day in Hyderabad, India thanks to the help of the Amazing Race. There was an instantly strong feeling of friendship and comradery as the group of Americans, Indians, and Australians not only learned a great deal about the city in which they would be working and living for the next two weeks, but also eventually found their way home.”  – Ryan