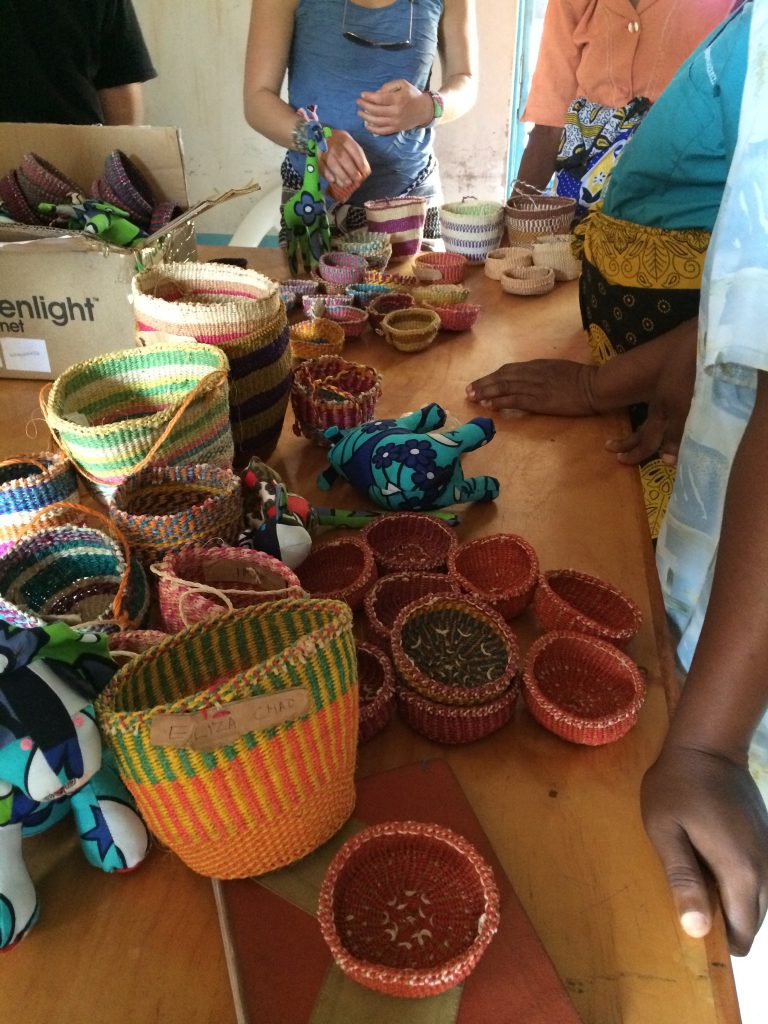 The first group, Makerere Arts, was comprised of low income women similar to the groups we had met with. They were making baskets for Haditha, a local CBO that seeks to identify markets for women in the ares, and many did not have rain tanks or other goods that Zawadisha provides. They were very interested in obtaining them for many of the same reasons as current groups – to save time, money and potentially provide additional income.

The second group, Buguta Disabled & Handicapped Women’s group faced many of the same issues but have an established business of selling handmade stuffed animals and woven baskets (which are packaged with soap and handmade elephant dung paper for sale). While they do not have steady income, when they get orders they make quite a bit of money. In terms of income and access to facilities they were definitely a step up from the first group we met with. Given that many of the women, their husbands or their children are disabled the act of getting water is a particular issue. As such they were interested in getting larger tanks than Zawadisha normally provides loans for. This requires a loan of twice as much as Zawadisha’s initial loans. In support of this being acceptable, one of the leaders, Gladys, made the strong case that they have previously had a loan of 40,000 shillings which they repaid no problem so a loan of 20,000 shouldn’t be an issue.

The final group we met with were a group of established businesswomen who were looking for a cash loan to add to their table banking pool in order to allow them to become independent from bank loans. They borrow money from their shared pool paying it back with 10% interest, in this way they are continually growing the amount that they are able to borrow to invest into growing their businesses. They ranged from clothing boutiques to shops to guest houses to rental properties to farming. Their hope was that they could get a zero interest loan from Zawadisha, which is what is provided for loans for products but normally cash loans come with an 18% fee to cover the operating expenses that are normally covered by the margin on the products.

In all three cases the groups and Zawadisha were able to come to a point where a viable pathway forward was possible, even if it meant moving beyond the normal structures that Zawadisha operates in. This ability to be flexible and creative in finding ways to meet the needs of the women while also ensuring viability from Zawadisha’s end shows the dedication of the organization to their mission and being adaptable to the different needs of different groups. This commitment to the vision of the organization rather than trying to shoehorn each group into the same structure is an example of the importance of they type of flexibility necessary to effectively engage in this much needed work and is a testament to Zawadisha.