This is surely the decade for real climate action. The Intergovernmental Panel on Climate Change (IPCC) warned that unless we achieve certain targets by 2030, we may pass the point of no return on many climate-related trends. California has always been a leader in the U.S. for climate action in wide ranging sectors, including residential energy efficiencies. Building codes that have grown more stringent over time require that new homes are energy efficient and ready for renewable energy generation. However, that still leaves millions of existing buildings that fail to meet these new standards. Existing buildings haven’t been ignored, but multiple efforts around the state to encourage retrofitting and electrifying existing homes have been disparate and have made only incremental changes. The efforts have been laudable, but insufficient to the California goal of increasing existing buildings’ energy efficiency by 50 percent by 2030.

An urgent call for systems mapping

Late in 2020, the County of San Mateo’s Office of Sustainability convened dozens of Bay Area organizations to determine how best to electrify existing single-family homes, as part of the nine-county Bay Area’s transition to an energy system free of greenhouse gas emissions. The County chose Presidio Graduate School’s PGS Consults team to facilitate a systems-thinking approach to the challenge of electrifying single-family homes in the region. PGS Consults, under my direction, championed a systems-mapping methodology deploying a series of workshops and focus groups with key players.

The Bay Area Regional Energy Network (BayREN) sponsored this multi-stakeholder process to understand the context in which electrification efforts are taking place and to identify new strategies that would have the highest impact on progress with the proper coordination and attention. Stakeholder workshops included representatives from public agencies, nonprofits, and private companies, and focus groups were held for contractors and homeowners. Sessions examined what is happening in the system that either supports or poses barriers to transitioning from natural gas (methane) to all-electric homes.

As Senior Sustainability Specialist Susan Wright at the County of San Mateo’s Office of Sustainability put it, “The topic of electrifying existing homes is getting a lot of attention right now, and great work is being done by a variety of organizations. We were eager to take a step back to look at the whole system to identify areas where coordinating efforts regionally could move things along faster.” 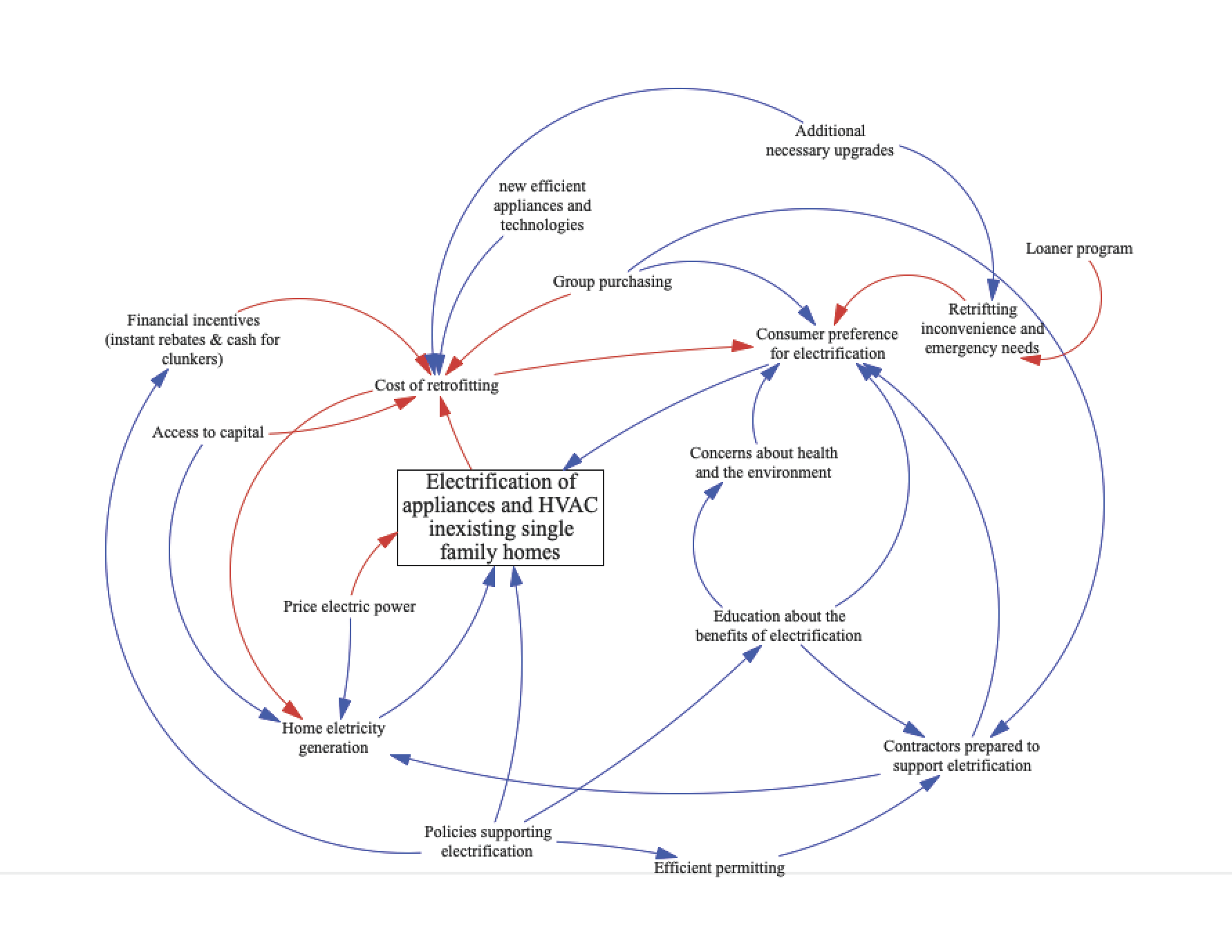 This causal loop diagram illustrates the cause and effect relationships among the key variables impacting the goal of electrifying home appliances and heating/cooling systems. Red arrows represent an inverse relationship (when one variable increases the variable it affects decreases and vice versa) while blue arrows indicate a direct causal relationship (the variables both increase or decrease together). The diagram helps reveal the most impactful points of intervention. The “busiest” nodes suggest that moving the system would involve impacting costs, motivating consumers and preparing contractors. Using these results, our stakeholder group focused on the overcoming challenges in three areas: technical challenges, structural issues and mental models.

We have the technology we need to solve our climate crisis; it’s just that implementing that technology poses technical challenges. While not insurmountable, these barriers are daunting enough to dramatically slow the process of switching from gas to electric in existing homes. Many older homes, for example, are insufficiently wired to handle additional, higher power (think amps and volts) mechanical systems. Even switching from a gas water heater to an electric one can trip the need for expanded electrical panels for homeowners. (Note from author: I know; I’m in the process of doing so in my home.) In other cases, the costs of purchasing electric appliances such as heat pump space heaters and the wiring and venting changes needed to install them lead to more extended remodeling than initially anticipated. Homeowners we talked with were also frustrated because few contractors in the area had the combined knowledge of plumbing and electrical systems required and tended to give high bids.

Addressing only the technical challenges, however, still leaves us in the place of nibbling around the edges of a problem. Systems thinkers know to look at the structure of the system in which the problem exists to understand the larger forces at play that keep the system operating as it is. As participants examined some of these forces, they realized that market forces, public policies, and even regulations were presenting larger barriers to the changes they were seeking. Homeowners are rightfully nervous about switching from natural gas (methane) to electricity given the price difference in the two energy sources and, more importantly in California in the last decade, the reliability of the electrical grid. It’s challenging to convince the public to switch from gas to electric when power outages are becoming more frequent.

And while California leads the nation in climate policies, we learned that those policies are not always consistently implemented from jurisdiction to jurisdiction, creating confusion among homeowners and contractors. Additionally, the implementation of some policies created ripple effects in terms of more complicated approval processes, additional paperwork and added inspection requirements that discourage the very projects the regulation was intended to foster. The same was found to be true even with the many financial assistance mechanisms created to support the change. While there are rebates and incentives available for various home electrification projects, they are inconsistently applied, inadequate to cover the incremental cost of an electric appliance, and time consuming to apply for. Contractors mentioned that the labor required to complete rebate paperwork often outweighs the incentive value itself. Finally, how can equity issues be addressed, so that all homeowners can participate in the climate transition?

Systems are also driven by the attitudes and beliefs of the people that create and operate within them. The groups uncovered a host of mental models that discourage the home electrification effort. Foremost among them is the concept of initial cost. Many of the changes suggested by energy experts require the purchase of equipment that is more expensive than traditional gas appliances, but that return greater value over time when paired with renewable energy sources/storage.

Many consumers either can’t afford the upfront cost or don’t understand the long-term benefit. The upfront costs also drive consumers to wait until existing appliances have reached their end of life before replacing. While not illogical, if they wait until equipment fails, they usually miss the opportunity to convert to an electric appliance, as the conversion can take several days to implement. When someone suddenly has no hot water, they’re not inclined to wait four days to make the switch.

Next, the homeowner is easily baffled as to what to do or not to do, because they have no whole-house electrification plan to help them avoid pitfalls as they more affordably electrify their homes one mechanical system at a time. Finally, the real estate market has been slow to value energy efficiency, so investments in energy conservation may not be adequately factored into a home’s valuation, often making granite countertops a better selling point than wall insulation or air sealing.

To overcome the cost barrier and the “wait until it breaks” attitude, the group is recommending three financial incentives programs:

The group also recognized the need to simplify permitting processes and requirements and make them consistent across jurisdictions. That led the group to consider whether a statewide policy would be more effective than a regional strategy implemented unevenly at the city level. Based on these conclusions, this effort identified key stakeholders to convene to discuss how to move the ideas forward.

As a culture, we rush to converge on actions in which lots of people are busy doing lots of things. But the existential problems require more synergistic efforts. A systems-mapping approach identifies the system’s greatest leverage for change. Often, the technology, the will, and great thinking are there, but change—such as transitioning homes from electric and gas to electric only—runs against a system with inertia.

A systems-mapping approach can reveal recommendations for many sustainability and social-justice problems, which are by definition multi-stakeholder. All you need is a convening of insightful participants, skilled facilitation, and forward thinkers such as the County of San Mateo Office of Sustainability, BayREN, and the other collaborators for these kinds of projects.

A version of this post was originally published on GreenBiz in our “Thinking in Systems” column on March 11, 2021.

Marsha Willard is a PGS Consults Senior Consultant and Professor Emeritus. To enlist the help of Dr. Willard and other talented experts to apply systems thinking in your organization’s “sticky” problems, start a conversation with us today. 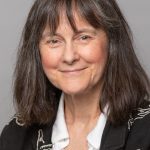 About the Author / Marsha Willard

Marsha Willard, Ph.D. is principal of AXIS, a sustainability consulting firm founded in 1990. Marsha applies her management consulting, training and facilitation skills to help organizations find responsible solutions that meet all stakeholder needs: owners, customers, employees, the community and the environment. Marsha has co-authored six popular business books including, The Business Guide to Sustainability and A Step by Step Guide to Sustainability Planning. She is an adjunct professor at Saybrook University as well as professor emeritus of the Presidio Graduate School and part of the Presidio pool of research consultants. Marsha is co-founder and former Executive Director of the International Society of Sustainability Professionals, a professional association serving the practitioners in the fast growing sustainability arena.