Sam Ruben: Learning the most from those we disagree with 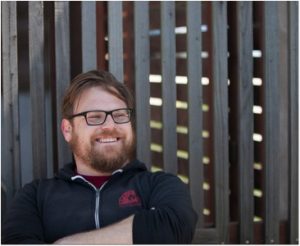 Sam Ruben knew before he applied to Presidio Graduate School that it was a place where he belongs. He was impressed by the aptitude and diversity of the “Presidians” he met through a good friend studying in the MBA program, and he immediately aligned with their determination to create a better world for the many, not the few.

This ability to constructively mix diverse backgrounds, interests and opinions is one of the graduate school’s greatest strengths. It’s not just that we can learn from people with different opinions from our own, the current president of student leadership says, but “people we don’t agree with are especially those who have so much to teach us.”

What’s energizing you about what you see unfolding in the Presidio community?

Sam: One of the key things about Presidio is that it’s inward focused, but also very outward focused. Right now I’m looking forward to engaging with impact accounting and how we measure impact investing. Impact investing is basically the idea of not just looking at monetary return but social return, like aligned investing. In learning about it, what struck me the most was that by law, foundations are required to give five per cent of their endowment and 95 per cent gets invested. Often they are providing grants for a certain cause, but because of who they’re investing with – using hedge funds or market funds – they’re not doing it with great intentionality and they’re investing more in the problem than the solution. It has an overall negative impact on the issues that concern them.

There are all these different frameworks that exist that I’ll be a part of. That is really exciting. None have come to fruition yet but just the concept is exciting, to be working with evaluators and actuators and people that aren’t necessarily connected, to find new ways to approach problem solving.

Can you share a story that demonstrates the best of what you see happening at Presidio?

Sam: I think the experience with the International Sustainability Club is a good example. This year we’re doing a lot of in-depth research around renewable energy in Chile. We watched a film, and the filmmakers spoke to us, about the proposed hydro dam being put up in Patagonia. Chile doesn’t have any fossil fuel; it has to import all its fossil fuels. How can they do that in a way that doesn’t destroy Patagonia? And all these really different, exciting things are going on. Chile could really be the poster child of what a nation could look like in terms of renewables. We’re applying what we learned at Presidio, and with experts from NRDC (Natural Resources Defense Council), in Latin America.

To have all that sparking and then to turn this into a case study not only for “Presidians,” but government, students at other schools. How do you take all these learnings happening and share it as a learning point for ourselves and future generations? I don’t know how many people in the U.S. even know about the issues happening in Chile. What they’re trying to do [in this project] is what we’re really going to have to do if we want to combat climate change in a way that doesn’t ravage the environment.

Sam: I think what’s pretty possible is almost anything, frankly. Learning about exciting new areas like impact investing also raises the notion that even though things might look pretty bad in terms of climate change, there’s still a lot possible daily. What’s possible is having hope. Knowing the calibre of minds working on these issues and breakthroughs happening on a daily basis really gives me hope for the survival and improvement of daily life. It’s not about sustainability, but about regeneration. Sustaining the status quo is not enough. It’s beyond just mitigating, but beginning to repair and regenerate the system in ways that are not just for a small segment of the population.

What conversation, if begun today, could ripple out into new possibilities for the community?

Sam: I think on a society level, really having a discussion about how we interact as a community – because I think we’re all too often more and more segmented and fragmented and discourse is becoming a lost art. All too often, values don’t come up because too often they devolve into name calling. If we can actually turn to respectful discourse on new ideas, not just my way or the highway, but to see that there is no one right way – there are a lot of different ways of doing things that would work differently for different people. Having respectful discourse about our values as a society would allow us to address so many issues – environmental, social, and political.

I believe people are by nature good, and if you can get past the dehumanization of the other, which is so much a part of our culture and media culture, you can get down to what people actually believe. A lot is a product of how educational systems are structured, where students just fill in a bubble to complete a test. We don’t teach people to take in information and analyze it for themselves. If we bring critical thinking back, instead of standardized testing, we can bring a lot of that back within the present context.

At Presidio, we have that discourse where we can disagree and still be friends and learn from each other. From those discussions we learn more about our own beliefs and become more open.

To begin to see that what’s happening at Presidio brought out into society more, can change anything.

PGS Takes EDF’s Climate Corps By Storm This summer, I will be writing the Strategic Energy Management Plan for the...

MPA Program offers chance to move from reflection to action

“Action is at the heart of sustainability,” says one Presidio Graduate School student who has been moved from thinking about...

An Ordinary Day in Class Leads to a New Career

Lindsay Saxby (C12) can trace her career at PG&E back to a single journal entry on an ordinary day of...