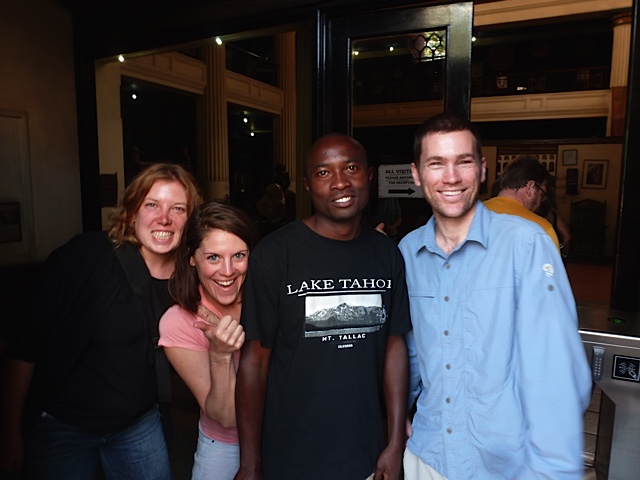 The International Sustainability Club has arrived in Nairobi, Kenya. To help contextualize the new environment we are in and learn some African history, we started the day at the National Archives. It is the largest collection of African art on the continent and the largest collection documents in East Africa, although it seemed like a smaller amount than we would have expected for that description. Even though we are 9,586 miles away, several reminders of California appeared. When we walked into the Archives, a man was wearing a Lake Tahoe California t-shirt. We were excited and explained that was close to where we were from, and he appeased us with a photo. The African Heritage collection had photos of its stops at the La Brea Tar Pits in Los Angeles, as well as San Diego.

From the Maasai beads to the Turkana cowhide shields, there was a lot of variety in artifacts. We were also educated on the history of the country. Kenya gained its independence June 1st, 1963. Independence brought greater participation in food production, industrialization, and development of professional skills. It also brought higher levels of literacy – today the country has one of the highest literacy rates at 85%.

There was a display on Tom Mboya. Dissatisfied by the only 16% representation of Africans, he won a seat in the Kenya Legislative Council in 1956. The end of East African colonialism was nearing and he eventually created his own political party, which had equal representation of African and Europeans. He is best known internationally for his Airlift Africa project, which sponsored promising African students to study in Western nations. Barack Obama Sr. benefited from this program. John F. Kennedy, then a United States Senator, agreed to fund the program. It was also supported by Hollywood elites such as Sidney Poitier, Harry Belafonte and Jackie Robinson.

Wangari Muta Maathai was one of the 300 Kenyans who studied in the United States through this program. She was a Kenyan political and environmental activist. She was the first African woman Nobel Peace Laureate. We saw pictures of her with Tom Cruise and Oprah at the Archives. On receiving the news of being awarded the Nobel Peace Prize in 2004 she stated, “It is evident that many wars are fought over resources which are now becoming increasingly scarce. If we conserved our resources better, fighting over them would not then occur…so, protecting the global environment is directly related to securing peace…those of us who understand the complex concept of the environment have the burden to act. We must not tire, we must not give up, we must persist.” It was a great inspiration to start our trip and to remind us what brought us to PGS, and now to Kenya.